The old Flour-Mill was demolished in 1964, however, the Concrete Silo remains on Bow Street Rainbow, and has an exciting new story.

The History of the Silo Flour Mill on Bow Street Rainbow

I can add a little to the history of this location.

This first story is open to interpretation, as I have one version from my father, and one from my Aunty Lesley. As they have both fallen off the perch, I'll go with Dad's version, as it is the one I have lived with for so many years..

My Grandfather, George McKenzie came to Rainbow in 1919 to complete a contract at the Albycutya bridge which spans outlet creek. He had a Commercial Steam Engine Operators license, which was required for the pile driver machine that punched the timber piles into the river bed.

When the job was completed, he found employment at the Flour Mill as they needed someone with his qualifications.

He later moved across to Tom Ismay and Son Building Contractors of Rainbow, and I believe worked there as a foreman for the rest of his working life.

As "McKenzie Woodhall and Chapple" Electrical Contractors of Rainbow, I wired up the concrete silo section of the site to 240VAC specs. I think this was 1964, and only basic wiring for lighting and power points was installed.

After speaking with Llew, he told me Bill Strauss had leased the silo from him, (1970s?) and installed a three phase motor, so he could use the silo for wheat storage. Robert Strauss, Bill's son mentions this in the comments. Thank you so much for providing this original B&W photograph to add to the colourised collection.

As photos of the old Flour-Mill of any quality are very scarce, I decided to spend a bit more time colourising this image. Gordon Gebert and Ossie Paech demolished the chimney in 1966 and the bricks were used for the majority of a nearby house.

You will see the red brick Chimney is colour matched to the house that Gordon Gebert built from these recycled bricks.

It sounds like many kids in town got to clean those bricks (at reduced labour prices), before my Uncle Colin McKenzie laid them. Glendon Gebert
The flour mill burnt down while being demolished in 1964 I think.

Don McKenzie
Can't remember this. I was there in 1964 and in the Fire Brigade, but then I was was often away working in places like Nhill, or Netherby, and it was a lot of years ago.

Sallylou Hamilton
Great idea looking forward to hearing more. Had many a childhood adventure there unbeknownst to grownups.

Jan Edelsten
I have seen a list of employees somewhere!! , maybe the archives would a great resource for you.

Robert Strauss
Bill Stocky Strauss and Jill Strauss used the silo to store wheat in when dad use to buy and sell. Remember sneaking in under the rail lines to get in and climb to the top that was early 70s.

Vicki Marshall
Great photo of the flour mill. My great great grandfather Charles Gregson, worked there many decades ago.

Jenni Dunn
I used to climb up the one at the end of Bow St. 🙂

Flour was always purchased in three bushel bags. People were able to take a few bags of wheat in to the flour mill and get it grist into flour and then they collected it from the mill as they needed it throughout the year at a small fee.

Some of the local merchants names were Bruntons, Dreyfies, Bungy, Thos Darling, and Thomas's who owned our local flour mill here in Rainbow. The Noske Bros mill was inside the grounds of the Railway Yards and catered for a great varieties of grain.

Sheila Chapman
We bought from Noske’s for bran, pollard for our pigs and poultry pellets for the turkeys. Mum had over 150 of them

The Mill House on the Corner of Cust and Bow Street Don McKenzie
This is the house that was owned by the mill. In the 1950s, it was occupied by Cheryl's Uncle Jack and Aunty Doll (Hutchins) Cashill when Jack worked for the mill. I believe it was when the mill closed, the family moved onto Murtoa. You can see the Mill chimney just next to the second house one.

Denis Mellington
Charlie Gregson lived in that house I think he was involved with the Mill could have been the Manager. Also remember the Cashills living there.

Nola Martin
Cecil Mcintosh Think the house was on the corner Geberts was the other side of the mill Cecil. I can remember Cashills living there.

Click on the image below to see it in full size. 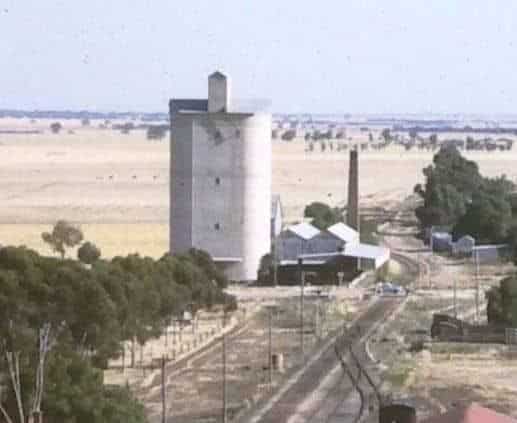 The old Flour Mill can be easily seen in this blown up section of the larger photo.
If you look at the photo of the old Mill house on the corner of Bow and Cust street, you will see the chimney from a different angle.

Glendon Gebert
Gordon Gebert and Ossie Paech demolished the chimney in 1966 and the bricks were used for the majority of of Gordon Gebert's house.

Ross Altmann 2014
The Rainbow Flour Mill chimney. It was knocked down early 60s and the red bricks were used to build Gordon Gebert's house. (Leon Cozens). Dookie Brooks cleaned the bricks after school for 1d one penny each.

Terry Dellar
Is this the house that Buck Brown lived in? He was the slaughter man for Sam West in the Early 1950s?

Dianne Bett
yes would say that is the house Gordon Gerbert built out of the bricks from the chimney stack at the silo, remember he gave his kids a penny/cent for every brick they cleaned... always thought that was a bit cheap... haha.. ??

Chantelle Petschel
This house is currently owned by Graham and Shirley Petschel.
It has also been owned by Phil Molesworth, Leon Cozens and Dellars.... over the last 40 years.