Keep up with the latest posts on images and stories from yesteryear at the "Wizard-Of-Oz.com". Don't lose our history.

To my Rainbow friends:

For the time being, I will not be posting any of my newly colourised versions of the ancient 1900s B&W photographs to "Rainbow - the Famous Australian Town" Facebook group.

If you wish to share this with your family, friends, potential tourists, or any Facebook group, then please do so. 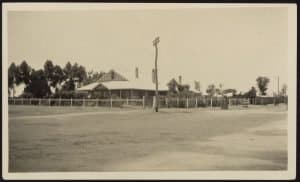 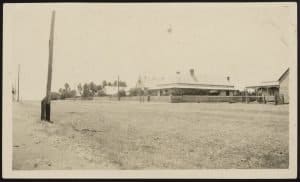 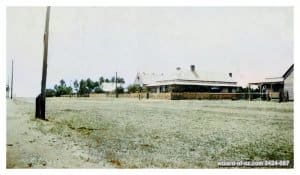 Don
Thanks Jan. Great work. I'll have to find some harder ones. 🙂

Diane Wall
Looks more like Eddy Street. From right to left in the sixties,
Williamson’s, Klemms, Strauss’s, Church of England, King Street next, then
Davis’s. This photo was much earlier in the century when A.G.Strauss was alive.
You can’t see the house in this photo because it was set back further in the
block, and there were no huge pine trees in the church yard and Williamson’s
front yard then, and there are electricity poles in the right places as now.

Helen Fisher
Diane is right. That is our house in Eddy St beside the Church of
England. We bought and worked on the original Strauss house. Both houses either
side of us now under restoration too.

Don
WOW. Thanks Diane, and Helen. Google street view
match the image below. The years and trees make so much difference.

Photo supplied by Jan Edelston.
The opening of St John’s Pella Lutheran church, 14 May 1911.
I straightened the image to be level with the ground and kept the cross and flagpole in the shot.

This is also a very recent find. However I don't believe it is Rainbow, as I can't match it in with anything. Could be Dimboola as it has an advertising signs that mention Dimboola Farmers Co-operative, Young Bros. Auctioneers, and Millers & Tartakover Solicitors.

Rainbow's bottom pub was Young's in the early years, but not Bros. to my knowledge.

26-July-2021 Consensus of opinion is that this is not Rainbow, however it hasn't been proven to be Dimboola to date either.

27-July-2021
My Friend Mick Gulovsen is now doing research for me. He found "Young Bros" in Nhill. More likely to be Nhill than Dimboola. See image below.

Yes Mick is the man that is black listed by ADMIN.
Go figure! This is a very recent find. I am not aware of the year, but it has me wondering what  year the station was demolished.

Making A Real Change. The old Flour-Mill was demolished in 1964, however the Concrete Silo remains on Bow Street Rainbow, and now has an exciting new story. 14-July-2021 - The Rainbow Fire Brigade. A few stories and photographs from the past.

The Rainbow Fire Brigade now has over 110 years of serving the local community. These are just some of the stories.

Mick's Colourisation Methods.
The colourisation procedure that my friend Mick Gulovsen is using. He shows us the steps involved for the featured photos at wizard-of-oz.com

The Rainbow Railway Station and rail yards. Several horse-drawn vehicles are parked in the yards, and stacks of bagged grain are visible. Taken from the roof of the Commonwealth hotel.

This was a 1909 coloured postcard that was so fire-damaged that I decided that it wasn't worth putting any time into.
The more I looked at it, the more I realised that it was of historical significance as it has a view of the bottom end of Federal street, taken from Darts Ave, in a time period that I have very few photos of. The height of the trees, the Royal Hotel single story, the Eureka double story, plus the lack of electrical poles down the middle of the street, make it certainly look like around 1909.

I distinctly remember being in the main bar of the Eureka hotel Rainbow on two very special occasions in February of 1966.

Colourising Yesteryear. A before and after Image Gallery of the Rainbow region, Victoria.

An index to help you navigate around the posts on this site.