A Rainbow hidden index to help you navigate around the posts on this site.

Darwin index to help you navigate around the posts on this site.

What’s New? The latest colourised images and stories about Darwin in the Northern Territory.

Rainbow Railway Station and Freight Yards in the early 1900s.

Freight started being shifted by horse and bullock teams. 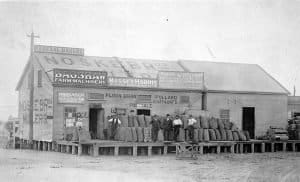 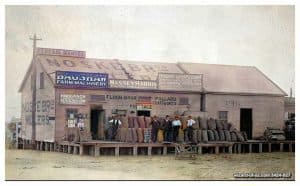 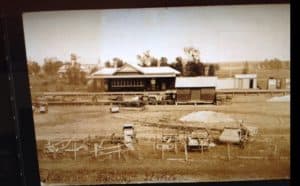 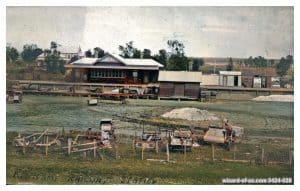 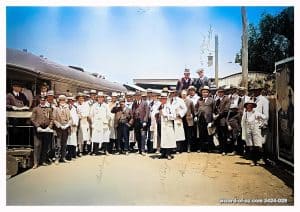 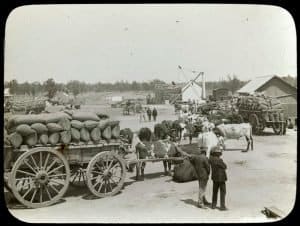 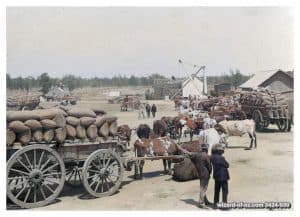 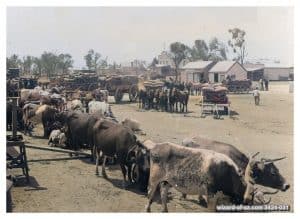 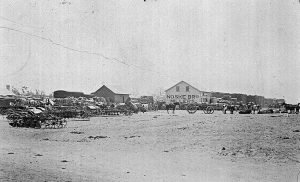 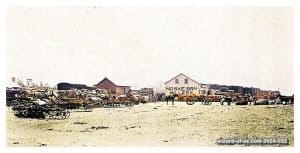 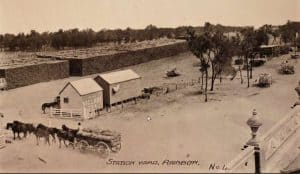 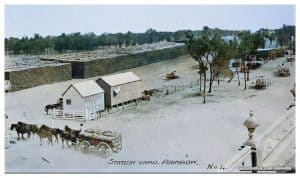 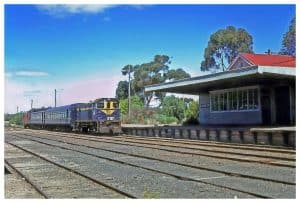 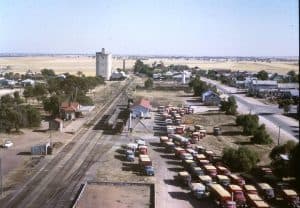 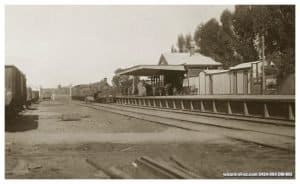 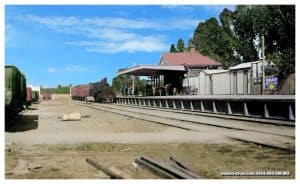 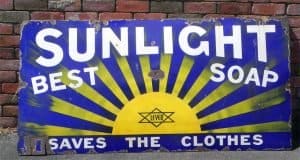 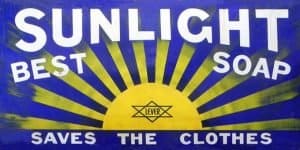 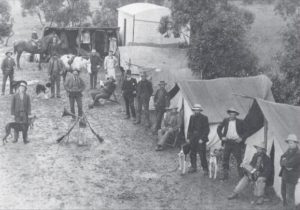 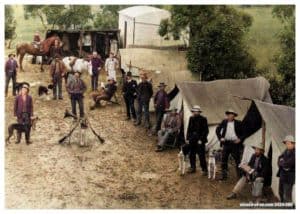 I came across this one with a Google search back in Feb 2015. Another Rainbow nugget found. Came up reasonably well with colour conversion, and more details can be seen with image enlargement.

There are a number of men standing on a raised platform where there is a stack of wheat (?) sacks. There are many advertising signs on the building including: Federal manure, Bagshaw farm machinery and Massey Harris.

The Railway station, the Catholic Church, and the house in Park St just in front of the Church, but this isn't Mr Livingstone's house either. As you can see, there isn't a lot on that side of the line in the early years. House is gone today, and this is a vacant block.

Not a great photo in itself, but it is of great historical significance.

Why? Have a look to the right of the railway station. A sports oval. In fact Rainbow's first sports oval, which has now been verified in other photos.

And behind the oval. Rainbow Rise!
Just off Rainbow Rises Road, which is the continuation of Bow Street.

This Google view below is centred on where this Sports Oval would have been.

Further to the left of the map, the old racecourse gets a mention. It is out past the current swimming pool.

A large group of people gathered on the platform of Rainbow Railway Station for the visit of the Better Farming Train. Many men are wearing suits, and some wear white coats (possibly 'lab-coats') over their clothes. A man standing on the far left is wearing a station staff uniform. An advertising poster is mounted on the platform fence.

I tipped this photo sideways and played around with brightness and contrast. There are 4 handwritten names along the bottom, and one name at the top.

said one is Mr Riby who ran the Rainbow Argus newspaper.

Kate Hickey
Could the white coats be motoring dust coats which were popular then?

Steve Goodwin
Images 5 and 6 are both taken in the railway yard at Rainbow at harvest and are in the State Library of Victoria collection. Excellent quality images meant easy conversion.

Steve Goodwin
Images 5 and 6 are both taken in the railway yard at Rainbow at harvest and are in the State Library of Victoria collection.

Rainbow Manufacturing Company in Railway Street can be easily seen in the back ground of this image. It is top centre. Ron Ismay has his business at this location today.

The Rainbow Railway Station and rail yards. Several horse-drawn vehicles are parked in the yards, and stacks of bagged grain are visible. A building marked "Noske Bros, Millers" is also visible.

Two T model fords in the foreground.
Station in the background can be seen with passenger carriages of a train pulled up at the station.

Rainbow, Victoria, circa 1920 The Rainbow Railway Station and rail yards. Several horse-drawn vehicles are parked in the yards, and stacks of bagged grain are visible. Taken from the roof of the Commonwealth hotel.

Taken from the top of the railway yard silos. The old Flour Mill is still standing, so the year has to be 1964 or before.

Another recent find Aug-2021
The Railway Station at Rainbow, Victoria, with a steam train at the platform. C.1920s.

Mick Gulovsen even found the correctly matching Sunlight advertising sign on the platform, and restored that as well.

Pictured near the present golf club. Very hard to imagine what  the old Rainbowrise township looked like during this period.

And for the people, a time of change. There was the added adventure of building  a new town adjoining the soon to be completed railway station.

Australia was to become a nation on 1 January 1901, and the streets of Rainbow  will be named after members of the Royal family, and their titles, along with  the soon to be born Australian Federation, as well as local prominent business  people-investors such as Cust, Dart, Gray, and Taverner. These names will be with  the town forever.

RAINBOW, the terminus of-the railway line running northward from Dimboola, has been aptly termed the "Mallee Metropolis" by reason of the fact that it is the centre of an extensive and rich agricultural district; and within a radius of 20 miles to the north, 14 miles east, 10 to 12 miles west and 8 miles south, the farmers make Rainbow their market town. The township is built on portion of what was, in the early days, known as Albacutya Station, and at one time was regarded as a desert waste.

As recently as 1902, when the memorable drought played such havoc with the settlers in the arid districts o the north, application was made to the Victorian Government for seed wheat advances, and one of the legislators seriously asked the question, "Is the Mallee worth saving" The result of the past few years have conclusively proved that the Mallee is not only worth saving, but, truly, it is worth having.

The land in the immediate vicinity of Rainbow was first settled on in the year 1893. A land board, sitting at Dimboola, granted selections to a number of applicants, who immediately entered into possession, and thus started the pioneering work.

It was a gigantic undertaking, and the works of these sturdy men and women is but half realised by the succeeding generations: As the younger generation gaze on the waving cornfields, the thriving city or the prosperous village they are apt to forget the toil entailed in the making of that city or town, of the labour necessary to bring those wheatfields to their present state.

Long hours of hard toil, with, in some cases, a weary wait for the reward, were their lot; but they were not discouraged. Through the long days and months and years they laboured incessantly, for they saw with far-seeing eyes, and realised that they were in a veritable land of promise. In the early history of their settlement, farmers had to cart their wheat to Beulah or Jeparit, and weekly visits had to be made to those towns for household requisites and other necessities. No relief in the mode of travelling was obtained until 1899, when the railway was extended from Jeparit.

The survey of the town-ship of Rainbow was carried out by Mr. A. E. T. Lobin, district surveyor, of Ararat, during the month of April, the same year, and in. this connection it is a noteworthy fact that the site chosen for the township was pointed out by Mr. H. Rogasch, a pioneer farmer. A bi-weekly train service was sufficient for the requirements, but this was superseded by a tri-weekly service, with occasional "special" trains. The extent to which business has increased may be gauged by the fact that during the past 18 months a daily train has taken the place of, three trains a week.

Rainbow Railway Station and Freight Yards in the early 1900s.