What is going on with the Rainbow Cafe demolition in Federal St?

I got quite a shock on a recent visit to Rainbow. George's Cafe was gone, demolished! I know it had many names over the years and held different memories for other generations. One could no longer simply duck up the street and get a picture of it. 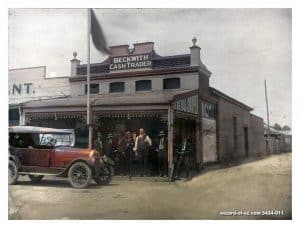 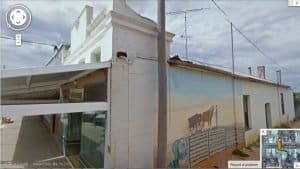 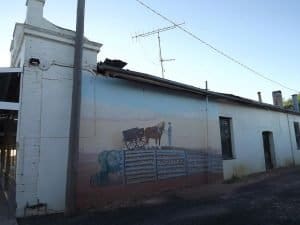 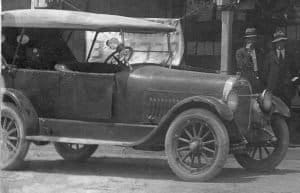 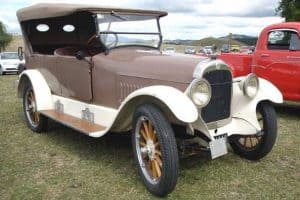 This photo was restored by my good friend Mick Gulovsen, and I went ahead and colorised it. I believe the result is really good considering what we had to start with.

This is a copy of the original photo I got from Ally Harper. She grabbed heaps of images, and fixtures from the building, as she hopes to restore it back to original in the future.

Is what the location currently looks like. OK, I had read about it in the Rainbow Jeparit Argus, and was aware they were going to demolish it because it became an unsafe building and a hazard to the public, but it didn't really sink in until I saw the blank spot in Federal St. It was like looking at a full set of teeth, with one of the front teeth missing.

But hang on. It is still there if you use Google St View to look around, This data base was created in 2010. I have done a grab of the Google Street view pictures, so there is some record of images of it in 2010, and people can at least view these in the future.

As best as I can with Google Street view, I have captured the Mural in the Lane. In years to come, this Google 2010 data base may vanish, along with the building. Imagine in 2110, in 100+ years time, if people could go back and view Rainbow's Google database of 2010.

This is one of the many pictures taken by Ally Harper before the building was demolished.

This is a 200% blow up and crop, of a 1910 picture of the same spot. This was taken from way back near King St. This is about as far as I could go with the resolution as it is almost at the point of turning into pixel blocks.

Would love to see some more 1910-ish pictures of Federal St, to help fill in a lot of gaps I haven't been able to fill in yet.

What is that Car outside the old Rainbow Cafe in the 1930s picture?

That car outside Beckwith's shop that Ally Harper posted back in November 2014 is a 1918 Studebaker Special Six Tourer. I know I didn't have to do this for any reason, but I pride myself on a general knowledge of old cars, planes, and manufacturing dates of same. So, I set myself the task of identifying the car parked outside of Beckwith's shop, just for a bit of fun. (Really George's shop ?? ) Little did I know that the chase would take me on a three hour Google adventure.

I started with the local Rainbow dealers and checked what type of vehicles they were supplying up until the thirties, then when that failed, Melbourne dealers. I concentrated on U.S. models, but hit a brick wall and decided to try the same procedure with English cars. Same problem.

So I took an entirely different approach, and concentrated on the radiator badge, which is the manufacturers logo. Even that wasn't a lot to go on, but I could see what looked like white area surrounding a dark splash of colour. Enough to take a guess from hundreds of logos if need be. Pages and pages of badges appeared. I was able to narrow it down to the Studebaker Logo. Once I had that, all I had to do was go through a range of pictures showing the different models for different years. And a fabulous shot of a restored to factory condition, 1918 Studebaker Special Six Tourer appeared, and I knew I had it.

I have added the original picture, as well as the updated one that I found on the web. There are a few minor differences in each car, that could easily be written of as local verses overseas manufacturing, or optional extras, same as we have today. The new picture of the car has a radiator cap temperature gauge, different mirror(s), extra running board trim, wind screen wiper. (possibly hand cranked). What really convinces me it is the same model and year car, is the split wind screen and the shape of it, the rail tube bracing between the guards (also head light mounts), is at the top of the lights which is very unusual. Logos look the same, chromed radiator enclosure. The bonnet louvers are the same, and the small twin oval windows in the fabric top at the rear, are identical.

But the clincher was the front door, and the way it is hinged. It is called a suicide door because it opens from the front. There is a gap at this position in both pictures. I don't understand what it is, but neither seems to fit onto the body panel correctly, well unless in both photos, the door is never fully shut. Perhaps it has a half lock plate, and drivers tended to be a bit lazy with it.